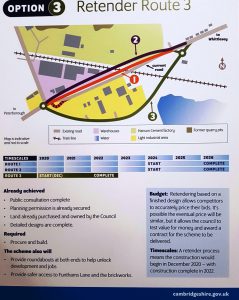 Firstly, I would like to thank Cambs County Councillor Leader, Cllr Steve Count (who I invited to come to Whittlesey) for holding 2 events here in our town. The first being Monday which was very well attended.
Today The Economy & Environment Committee was brought to the Whittlesey Christian Church.
The reports and agenda are well published below on the web-blog over the last few days.

History in the making – being that The Kings Dyke Bridge Crossing (Option 3) is to proceed to the next stage – that being competitive tendering for the build and construction.

3 Speakers, first to speak -Whittlesey & FDC Cllr Alex Miscandlon gave the committee a insight of the on-going issues of transport infrastructure, the increasing traffic and the associated pollution. He high-lighted the issues of when the North Bank is closed.
Next was March Cllr and deputy leader of FDC Jan French who also highlighted the on-going issues.
Finally Leader of Cambs CC Cllr Steve Count gave the committee a robust argument for delivering the bridge/crossing.
After the Committee discussed various points and costing, along with a none open ended contract or pricing.

This entry was posted in News. Bookmark the permalink.