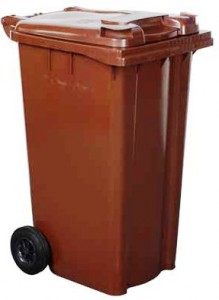 ing read the ‘blurb’ which FDC have sent out – I and ‘many’ others I have spoken with get the distinct impression that FDC would like us to believe that ‘everything is FREE at the council…..Whilst I accept what they have written in the ‘blurb’ is factual and true, most people ‘thought’ (wrongly) that the collection of ALL waste was included in our Council Tax/Rates.
The £10,000 consultation is very ‘engaging’ for a decision already made.
Having spoken with ‘a Peterborough Refuse Bin Driver (25 years @ PCC) he informs me that when the ‘Brown Bin Tax’ was introduced the majority at that time did not take up the offer – most rubbish went elsewhere – the other bins became ‘overloaded’
Only last week in Mayors Walk Peterborough – all bins had notices put on them – to the effect that -If the incorrect waste was put in the bins – they would not be collected in future’

Of course part of our ‘democratic’ process of this ‘consultation’ are several ‘ leading questions’
One being how many times ‘we’ use’ the re-cycling centre. The centre is owned and operated on behalf of Cambs CC – and it is only 2/3 years ago that we had a very big campaign to keep our Recycling Centre open – we were successful but it will be back on the agenda at some stage – when (not if) this happens – where are we then going to take our waste!!!!

Since my wife does most of the gardening I have left her to complete the FDC questionnaire.

I would suggest the ‘we’ all ‘Boycott’ the Brown Bin Tax’

As stated in my previous posts – the suggestion of £40 per bin, depends on how many people take up the offer? – less than expected – then it will be more than £40
It maybe that the Brown Bin Tax is ‘popular’ and the cost ‘could be less’
(and I ‘could win the lottery’)

Year-on Year – it can only go one way – Upwards – this is a stealth tax.

I don’t care about other Councils or areas, I care about here where I live and am retired.

This entry was posted in News. Bookmark the permalink.